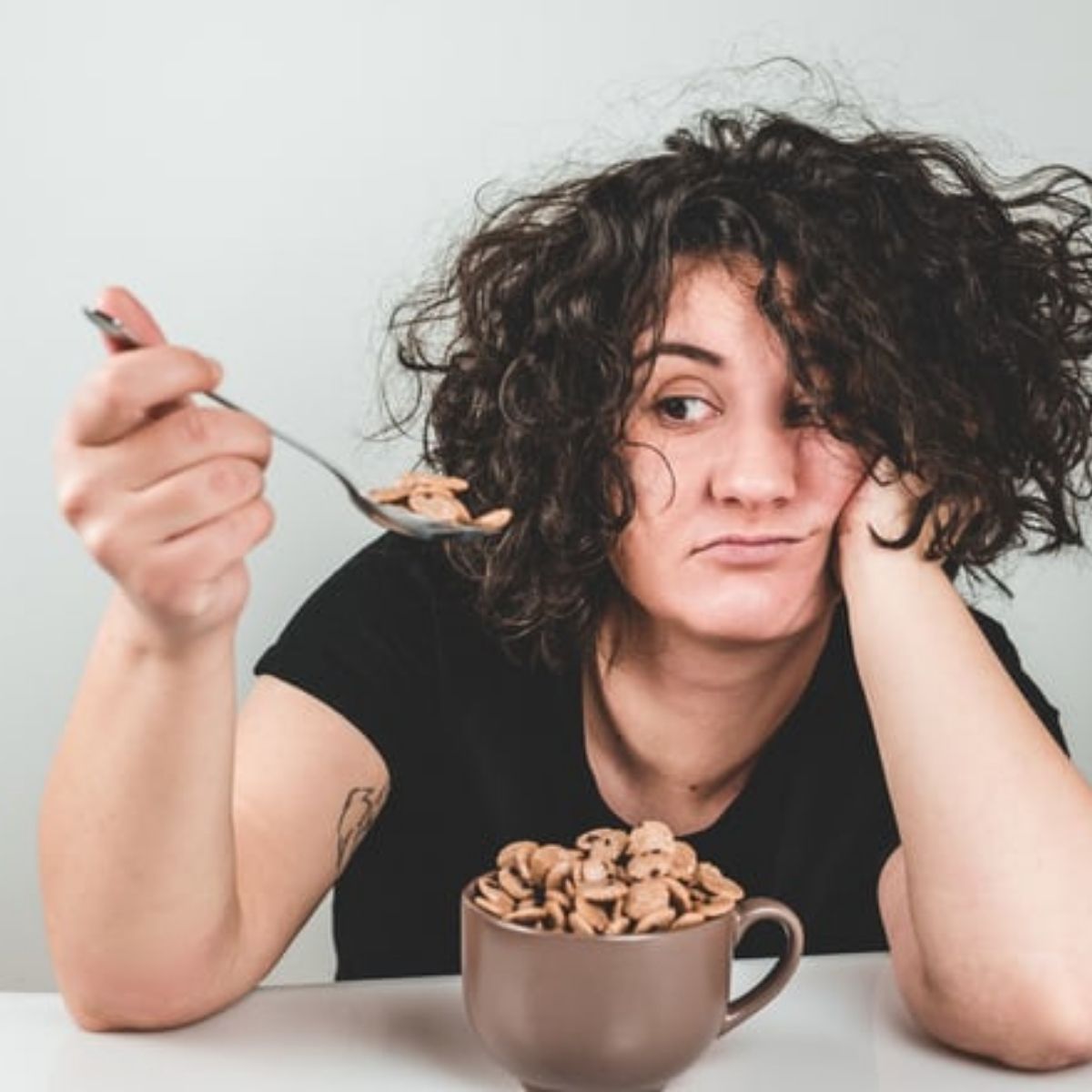 What Is A Binge Restrict Cycle?

Do you feel out of control with food? Do you feel like your blacking out or hitting a “coma like” state when your favorite foods are present? You might be stuck in a binge restrict cycle.

The binge restrict cycle occurs when a person consumes a large amount of food (much larger than you see people around you eat) and then attempts to restrict their food.

You’re not alone if you’re riding the wave of a binge and restrict cycle. For someone struggling with binge-like behaviors- favorite foods can feel like your kryptonite.

The binge restrict cycle’s signature is that it will always builds on itself (it WILL seem more intense each time we give into it)- unless you break the cycle.

The cause of a binge can be mental or physical restriction of energy.

Heres what the restrict part of the binge restrict cycle looks like:

When food is intentionally restricted, it’s a big red flag a binge restrict cycle is likely to occur.

Let’s tap into how restriction as a way to try to control our binge behavior generally just makes the cycle stronger- and what to do about a binge instead.

Am I Binge Eating Quiz

First let’s explore if you are truly binge eating. To do this ask yourself these questions and take the binge eating quiz:

Take this binge eating quiz to get more insight into if you’re truly experiencing a binge- or if something else might be happening.

It’s important to note that many people can have “binge episodes” without having binge eating disorder. However, all binge episodes will likely leave a person feeling helpless, out of control, and completely immersed in the experience of consuming food.

It’s also important to note- that sometimes if we are severely restricting nearly all food intake might feel like a binge even if the quantity is very small.

What Is It Called When You Starve Yourself and Then Binge Eat?

This is known as food cycling. It’s important to note that some food cycling is totally normal.

Most people naturally can have a few days they eat less or more than others. Normal food cycling still honors hunger/fullness cues.

If we are intentionally restricting followed by a binge- this does not fall in the realm of honoring our body and following its cues.

Imagine if you will- a stressful week at work where the boss is breathing down your neck about his next deadline that really shouldn’t be any of your business.

You may choose food to soothe the week from hell. You may then cycle with restriction into the next week, feeling immense shame and guilt for not simply being more disciplined and taking the boss’s shit like a champ.

If we can simply let the week from hell go and move back into our natural intuitive eating rhythm once it’s all over, we will likely just move on.

Here are some examples of intentional food cycling:

How Do You Break The Bingeing Cycle

When you restrict food, several things happen to your body:

In addition to binging, many people can also experience hoarding food which involves the need to eat alone, hide food, or steal food.

To break the restrict-binge cycle, we MUST discontinue restriction.

Is It Normal To Binge After Restricting?

Over thousands of years, humans have experienced bouts of feast and famine.

Our bodie have adapted very efficiently to alter production of leptin (our satiety signals), grehlin (our hunger signals) and even the rate of enzymatic reactions we have when we restrict our food on a regular basis.

Why? Because this is how humans have survived over millions of years! you’re not going to beat that system.

So is binging after restricting normal-absolutely! Our bodies just doing the one thing that it does best-protecting us!

Here is the breakdown of how under eating causes overating

One fun fact is that salivation increases even if food isn’t present(we’re just thinking about it- which is common when we restrict)!  Salivation is actually the first process in digestion, and actually begins to produce salivary amylase– A digestive enzyme!

We see increased digestion hormones both before AND after eating when we’ve restricted our food intake.  Our body is making sure that is is fully ready when food becomes available!

As we can see, restriction will never lead to solving our urge to binge.

Signs You’re At Risk of A Binge

A binge can have many triggers.  A few of the most common binge triggers can include:

Anorexia nervosa is a life threatening condition which often involves severe restriction, a reduction in body weight, and increased stress and anxiety. Following bouts of severe restriction, as is the case with anorexia, it isn’t uncommon to see someone struggle with binge eating.

This results from the body trying to regain the weight to match that of its genetic blueprint. All biological processes geared to avoid the effects of a famine (what the body believes is happening in anorexia) will be in full swing!

It’s very important if you are struggling with anorexia or any other type of restrictive behavior that you work with a healthcare team to develop an eating disorder recovery meal plan to fit meet your needs. Without a plan specific to your needs, it is likely under-nourishment will continue and escalate.

It is not uncommon for someone experiencing a binge to try to get rid of the food from the body.

A binge can leave you feeling

These feelings that come with a binge can lead someone to want to use purging (getting rid of food through laxatives or vomiting) to get rid of these uncomfortable feelings. Those who purge may feel cleanliness and relaxation.

Those who vomit following a binge will experience altered brain chemistry and a rush of endorphins. A surge of serotonin is released with vomiting, and this can become addictive.

Purging can add an additional level of complexity to the binge and restrict cycle. Ultimately, the treatment for a binge purge and  restrict cycle will again be to target eliminating restriction.

While the best method of action when it comes to a binge is to prevent restricting and normalize daily intake, there are a few things you can do when the urge to binge hits suddenly.

I don’t ever encourage simply “trying not to binge” as this often just intensifies the feeling of wanting to binge. Instead I encourage holding off the binge for a certain duration of time or even trying something called urge surfing.

Things you can do to hold off a binge include:

What Are Some Tools You Have Used To Stop Bingeing And Restricting?

These eating disorder recovery books may also be a valuable asset in making peace with your body and you rfood choices.

Are there any strategies you have been successful with in breaking the binge and restrict cycle?  drop them in the comments below!

How Long Does It Take To Recover From A Food Binge

The length of time to recover from a binge will vary greatly on whether someone initiates regular meals and snacks (every 2-3 hours) or proceeds to restrict following a binge. If a person restricts following a binge- a binge will continue on and get bigger until regular meal structure is initiated. For those that are able to successfully implement tools of regular meal timing- it may take up to 21 days to reduce binge behavior and as much as 2 years to keep up the habit.

What Are Some Tips To Recover From A Food Binge?

Eat regular meals and snacks (no more than 2-3 hours apart), Practice food neutrality (no food is morally or nutritionally superior to other foods, dismiss food rules (such as no sugar, no fat, low-calorie foods, get adequate sleep, reduce stress, maintain adequate hydration.

Should I Fast After A Binge?

How Many Calories Are In A Binge?

Binge episodes are not calorie specific. While the official definition of binge constitutes “more calories than most would consume in a setting” this notion is subjective. Binge behavior should be classified as 1) feeling out of control with the food. 2) feeling like you cannot stop until a certain point/put down the food before a consumption expectation is met 3) feeling extreme shame/guilt following consumption of the food. There is no specific calorie range associated with a binge.

What To Say To Someone With An Eating Disorder

What To Eat When Nothing Sounds Good